Nicholas J Boyd is a self taught artist experimenting with painting and sculpture. His yearning to create began at an early age remembering a burning sensation or internal nagging to want to build or make things, probably inspired by his farther building an optimist sail boat in the car port. This passion did not come into fruition until he entered secondary school where he took woodwork classes, art design and drum lessons. He enrolled briefly into a sculpture class where there were only two students. While engaged in these studies, art as a career for Nicholas was like trying to visualise the bottom of the ocean without having ever been there. 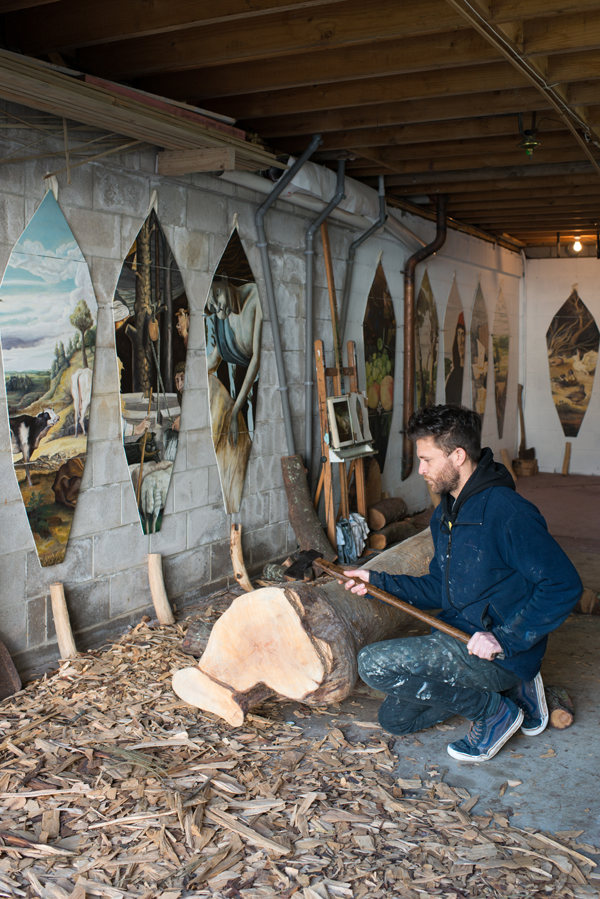 After finishing secondary school he studied half a science degree at Otago University where he engaged in music, sports and general science studies not knowing what he wanted to do with them. After this short stint he returned to Auckland in 2004 where he picked up a paint brush with proper intent. He found Jean Michel Basquiat and became enthralled in his paintings and life storey. While painting on his bedroom floor he completed a Bachelor of Communication studies majoring in Radio from Auckland University of Technology also completing a exchange studies programme to Monterrey, Mexico. Here he was swallowed whole by the vibrancy of the culture, History and aesthetics of the country. He continued to experiment with art while living and travelling there. He then travelled to South America where he experimented with art in every opportunity he had while passing through Chile, Argentina, Peru, Ecuador, Uruguay and Bolivia. When he returned he took up residence at The Cross Street Studios in the heart of K Rd, started by a group of art students. He became involved with the daily runnings of the collective, organising shows in the gallery and switching his focus seriously to oil painting. After graduating Nicholas made the decision to devote all his time to artistic practice.

Cross Street Studios Arts Collective and more recently being a member of The Carwash Gallery/Studio Arts Collective were Nicholas's art schools. Being around other working artists provided him with insight into how and why artists were using their time in their feilds. He helped to organise, curate, hang and manage sales through these collectives. He was able to engage in conversations with other artists, to discuss techniques, to trade ideas and live a life surrounded by creativety and exhibition of art work in all forms.

Nicholas's artistic talents lie in his natural instincts and powers of observation and dedication to the practice and experimentation of his work. Where ever he goes he is scanning the environment and draws in visual or situational stimuli where it remains in his head to smoulder and meld into artistic output. The heart of his work lies in the practice of experimentation as a means to bring forth something that may have never been seen before, to push the boundaries in the realms of artistic creation and to continually learn about the world to ensure self improvement in all aspects of life that lead to a greater understanding of our existence. He is a traveller at heart. Having grown up in Brunei from the age of nine his fascination with learning new cultures and knowledge of the world was ignited there with many family trips to destinations within Asia. Travel and exploration whether it be geographically or in his own mind keeps him motivated to continue to create in knowing that when pushing yourself beyond your boundaries what is around the corner is unknown and the knowledge gained by this exploration will further his artistic endeavours.

Email: This email address is being protected from spambots. You need JavaScript enabled to view it.

Co-Organiser of Auckland Zinefest 2009 and 2010Dead

- Featured Artist for NZ Sculpture on the Shore 2016

Gained a Bachelor of Communication Studies majoring in Radio from the Auckland Univeristy of Technology (AUT). Graduated in 2008.

2012: For to do Something: Te Karanga Gallery. Krd, Auckland. NZ

-Do You Think it has Legs. Carwash Gallery. K rd, Auckland NZ

-The Vernacularist: Featured artist for the Environmental Issue. Depot Press.

2016: Wok of Art: Artist inclusion into the wok of art Project produced by Tiger Beer. Featured artist in the video below.

2016: The Northshore Times: 2nd/8/2016. Featured artist in article about the upcoming Sculpture on the Shore.

2016: Channel Magazine. Featured artist in the November issue for an article on NZ Sculpture on the Shore.